Elasticity of Belief and Degrees of Sin 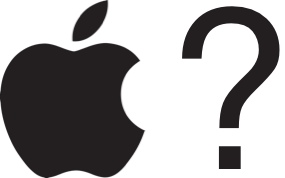 A good friend of mine shared an article with me today entitled "Is Apple's logo blasphemy?" Frankly, it is hard for me to take such a question seriously, because it just seems preposterous on the surface. But there are people who might take it seriously, including those mentioned in the article and some of its commenters.  So I figured I should attempt a more serious answer.

First of all, let's consider the stretch of belief, the leap required to accept the proposition. All belief (i.e., assent to something proposed as truth) requires some amount of a "leap of faith" (using "faith" in the popular sense of the word, not in its proper theological sense, where God is the definite object of faith). The question is always just how big of a leap of faith one must take to accept a proposition.  Francis Schaeffer demonstrates this ably in his Trilogy, in his encounter with an existentialist. Even to avoid the simple conundrum of solipsism requires some basic amount of faith in reality per se.

So belief inherently contains a spectrum of credulity, and given the wide array of beliefs, I am often struck by the elasticity of belief--how it is so able to stretch this way and that.  Even one person is able to believe in such demonstrably self-defeating propositions like relativism.

Back to the subject at hand, despite the straightforward, logical explanations of the people involved in the creation of the Apple logo (even cited in the related article), for which almost no leap of faith is required, people craft another story, one that implies some diabolical conspiracy, as if Jobs struck his own Faustian deal with Mephistopheles in order to gain vast riches only at the cost of his soul. The leap of faith required to believe such a story is orders of magnitude larger than the simple story given by the actual people involved in the creation of the company and logo.  (And let's not forget that Job's history with the company was hardly a trajectory towards the stars from the get go...)

Which story is more likely? You decide.

Now, for the more credulous, let's consider for a moment that the alternative story is true.  That Jobs et al's intent was indeed to thumb their noses at God, that they intended to draw some parallel with the biblical story, that their products were somehow the new forbidden fruit.  I dare say that the Apple marketers would love this association, because it adds even more appeal for the vast majority of people. Our fallen nature desires the forbidden and relishes it simply because it is forbidden, as St. Augustine describes in his Confessions.

So let's say that was the intent. Isn't what made the forbidden fruit forbidden that God made it so?  Are we therefore saying that Jobs et al have that same power--to arbitrarily set up their products as divinely forbidden? In order for their products to be so, we'd have to grant them such divine ordinary power.  Not only is this impossible (they are not and can never be God, nor have they been given the Keys as St. Peter and his successors), believing this, too, would be a tremendous leap of faith, and it gives these men way too much power.

No, I think it's safe to say that they cannot, by their associating their product with the forbidden fruit, actually make their products a forbidden fruit. So then, their products, despite the imagined intent, are just products, just like any other manmade product. They have a designed purpose, and it is up to the user of the product to use it for good or ill.

Still, let's go further, lets say that somehow by purchasing and using Apple products (and displaying the logo) that we are somehow de facto participating in this thumbing the nose.  In moral theology, there are the concepts of proximate and remote, formal and material, active and passive participation in evil.  Do you by using Apple products intend to thumb your nose at God?  No, well that makes it material (i.e., much less serious than if you do--God looks on the heart and judges it, 1 Sam 16:7).  We can further say that buying such a product in spite of the intent would qualify as passive, mediate, and, possibly, proximate.  In other words, it may not be the remotest participation, but it's pretty dang low.  Add to this that basically no one in the world sees the Apple logo in the way described, and the actual effect of such an act is virtually null, that is, it seems that someone else would have to recognize it as an affront to God for your unintentional display to have any real effect as evil.

Of course, it would be better to not participate in evil at all, but this presupposes that the incredible claim about the logo is true.  So if you're willing to give credence to that, and you want absolutely no participation at all, then sure, don't buy Apple products. Or just cover up the logo.  But I hope you're consistent and as choosey with all the products you consume. I guarantee you that nobody who lives in this modern world can be free of material cooperation in evil in some way or another--people are just not perfect and any consumption of another's goods will almost inevitably involve at least remote participation in their evils.

Apple has real, documented evils that they've engaged in--you don't need to imagine one in relation to the logo.  But most businesses, especially large ones, have plenty of objectionable practices, and even if they aren't documented, you can rest assured that the sinners involved are being supported by the money or goods you give them.  This is just as true of your church as it is of any business.

So the bottom line is, you have to figure out where you draw the line in participation in evil. But you should be consistent and not single out this or that organization.  Generally speaking, what your intent is and what you do with the things that you purchase is far more important to your own sanctification than what the people who produced it do or intended.  If you manage to get your own life so perfect and free from sin, then I'd say you can start in on eliminating your remote material participation.  But be careful, because as soon as you do that, you're very likely to fall into spiritual pride, which is immeasurably more damaging to your soul than any remote material participation in evil.
Posted by Ambrose Little at 10:59 AM

Review: Saint Anthony of Padua: His Life, Legends, and Devotions

My wife and I just finished reading Saint Anthony of Padua: His Life, Legends, and Devotions. I requested it because we, like many, are fans of St. Anthony, my wife especially so.

This book is a composition of essays and some reference material on prayers and shrines to St. Anthony towards the end. For the uninformed, it's a great way to get a deeper understanding of Anthony and the many years of intense devotion to him over the years.

I was reading parts of it aloud to my wife in the mornings over coffee, and we came to where we could anticipate what was coming next. We even joked about it, because the book is very repetitive. This is its nature as a collection of independent essays, each of which recounts Anthony's life to greater or lesser degrees of detail, each with some slight difference in focus and perspective.

The compiler/author, friar Jack Wintz, O.F.M., says up front that it can be used to reference here and there--that it doesn't need to be read straight through, and I think that it would probably be better consumed that way.  But hey, repetition is the cousin of mastery, so my wife and I feel like we really know St. Anthony's life now.

As a lay Dominican, I have to note that it seems St. Anthony would have been more at home with us Dominicans. He had a similar, it seems, Augustinian education--much like St. Dominic himself. He had a knack for preaching, and we are, after all, the Order of Preachers. He had a strong desire for contemplation, and that is a strong part of the Dominican tradition.  But hey, God knows what he's doing, so I'm sure he had a reason for calling Anthony to the Franciscans. :)

I haven't read other books on St. Anthony, but I think I would prefer less repetition and more in-depth original material, building on what precedes. Still, it's a very readable, short book, and you'll definitely grow in your understanding of Anthony, so I can recommend it.

----
Thanks to the Catholic Company for sharing this book with me. As part of the FTC rules, I have to be clear that they gave this book to us in order to elicit a review. The Catholic Company is also a great source for first communion gifts and baptism gifts.
Posted by Ambrose Little at 1:49 PM