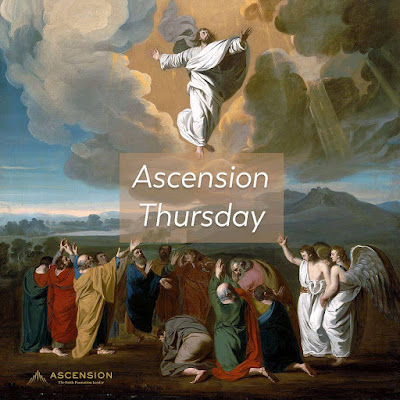 It's Ascension Thursday again, and with that comes the yearly opining about the fact that most dioceses in the U.S. have moved its observation to the following Sunday, and how it'd be soo much better for us all to observe it on the actual day.

I do get it. In an ideal world, society would be arranged in a way so that observing holy days would not be problematic at all. I wish we lived in that world, but of course we don't. There are reasons that the Church has allowed bishops to move the observance.

I know I'm getting soft in my old age, but I've gradually come to recognize the superior wisdom of the Church in many of the "relaxing" changes made over the last 60 years (and the relaxations before that). Here's what I see as the wisdom in moving mid-week holy days of obligation to Sundays:


In short, our society has made it progressively more difficult to observe holy days during the week.


Now, if there's a compellingly good reason not to move it, so be it, but if we can accommodate and move, I say do it.

I've noticed that there is some rigorist/traditionalist notion that making things harder and more inconvenient makes them somehow better and more desirable. I think this notion stems from spiritual pride--particularly in the cases where one looks at others and thinks ill of them ("they're just lazy/not devout enough") for not being inclined to take up the same, more rigorous forms of devotion. I don't think most people who feel this way are even particularly conscious of it, but I suspect if they examined their consciences, they may find it is so. I know for myself, I have progressively become more aware of such tendencies in my own life over the years.

As for myself, I've decided to submit my judgment to that of the Church. If She says that, in our current cultural milieu, this or that is or is not required, I'll follow it. I won't try to make up new obligations for others that She doesn't give us. I may (and actually do) take additional devotions and even obligations upon myself, both personal and as a lay Dominican, but I don't think everyone should do those, much less that they should be enshrined into canon law.

This is not to say that "doing the minimum" is a good aspiration by any means, only that I think we should not "tie up big burdens that are hard to bear and lay them on others' shoulders." (Matt 23:4) It's one thing to challenge and inspire people to be better by the excellence of one's own life, quite another to try to insist that they be better (and think ill of them when they aren't).

The reality is that we are all called to be perfect as Christ and the Father are perfect (Matt 5:48, Jo 10:30). That's a tall order that none of us is able to achieve of our own accord (Ro 3:10,20). The obligations of the Church walk a fine line between inducing us towards living up to that ideal and creating opportunities for yet more sin. St. Paul wrote about how the Law, in a sense, created sin (Ro 7:7ff).  He also wrote about the grace and freedom we have in Christ--that it is not our perfection that makes us perfect but rather the merits of Christ being attributed to us through grace (Ro 3:24, passim). Does that mean we should sin more that grace may abound more? "Absolutely not!," he answered emphatically (Ro 6:2). And yet it remains that our fundamental orientation under the New Law is towards grace and perfection in Christ, not of our own works--lest anyone of us should boast (Eph 2:9).

So I think the Church, while Her various laws and precepts have changed over the years, is wise to minimize those which may inadvertently lead to yet more sin. And besides, surely there are plenty of ways to encourage and lead people to greater holiness than ecclesiastical law?


P.S. One of my Facebook buddies suggested the idea of simply making it not an obligation but still observing it on Thursday. That's not a bad idea, in my book.
Posted by Ambrose Little at 10:17 PM