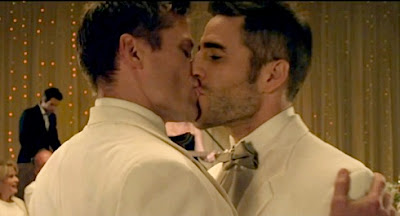 I usually find myself needing to explain/defend Fr. Martin from his many rash and ungenerous detractors. But there are times where I do think he crosses the line of letting his good intentions lead him astray. And I do firmly believe he has the best intentions, including a desire for the salvation of souls. I have little doubt that God has, does, and will use him to draw people to himself who might not otherwise be able to hear His calling.

But as all of us do, sometimes we make missteps, and for someone who lives as publicly as Fr. Martin, those may be more noticeable and noticed than your average person. I think Fr. Martin's recent interview with Brandon Ambrosino is one of those cases.

Brandon, a professional journalist, is a public gay Catholic (as in, he writes about it as a journalist) who is engaged to be married to another gay man. I say this to ward of the usual accusations that I am making his private bedroom business my own. No, he makes it our own by making himself a public figure with regards to this aspect of his life. So, fair game..

In discussing his public gayness with Fr. Martin, he relates how he wants to kiss his partner in Church during the kiss of peace but doesn't feel he can/should. Fr. Martin reacts, saying, "You have internalized rejection already. You don’t even need to be told that you’re rejected in the Church, you’ve internalized it and that’s very sad. A lot of the people that Jesus came into contact with did the same thing." Such a sense of rejection is sad, to be sure, but Fr. Martin goes on to say, "So I hope in ten years you will be able to kiss your partner or soon to be your husband. Why not? What’s the terrible thing?"

I understand this is part of Fr. Martin's larger impetus (which he rehashes in the interview) to call out Christians for singling out this sin, and calling us to "build a bridge" to persons who identify as LGTBQ. But, instead of saying that the Church should equally call out these other sins that Father mentions, he seems to say that we should rather be as laissez faire about homosexual behavior as we are about other sins.

What's "terrible" in all of this is the sin itself. It's terrible not because anyone has a personal revulsion/fear of it but because sin, in principle and reality, damages one's relationship with God and others. What's terrible is the suggestion that the Church should turn a blind eye to sin. Fr. Martin is right that we have often unfairly singled out homosexual sin in the Church, especially in recent years since it's been a hot topic in our society, but he seems to have the wrong solution--to not only acknowledge that we are all sinful but also to further normalize that sinfulness, in a public way. To say, it seems, that "it's okay," that we ought not to care or feel a need to repent.

Brandon and Fr. Martin offer a few other examples, like ignoring a homeless person or abusing power. Should people who do that not be allowed to kiss in Church? This to me seems to miss a key distinction, which is that--by his own admission--part of Brandon's motivation is to normalize homosexual relationships in Church, in the context of the mass. Brandon openly argues that homosexual unions should be blessed and be considered to be sacramental and indicates that his kiss is not simply one of, say, Christian brotherly love, but is meant to be a public display of affection within the context of his sexual relationship with his partner.

There are two things wrong with that.

1) It misunderstands the whole purpose of the "kiss of peace." This is not an opportunity for us to share our personal affection towards our brothers and sisters in Christ. It is an opportunity for us to share Christ's peace with each other. The purpose is for us to share the love of Christ, his peace, and be reconciled to one another, which unites us all in Christian community. It's not at all necessary (or even relevant) that we have any sense of personal affection. In Brandon's defense, this is a common misconception about the Peace in the Church.

2) A kiss between two people that is meant to be a public display of affection of an immoral sexual relationship (such as two gay men in a sexual relationship, two lesbian women in a sexual relationship, an unmarried, cohabiting sexually active straight couple, a man and his mistress, and so on) is at least sinful in itself, and it is compounded by its being public and in the context of mass and in the context of the kiss of peace (which again is not supposed to be PDA but an expression of Christ's peace). All of that adds up to it being completely wrongheaded and (I don't use this term lightly or often) scandalous, not in some prudish sense but in the formal Christian meaning of the term.

A Christian who is trying to live a converted life to Christ should feel that such a display is inappropriate, and our response should not be "let's hope people are cool with it in 10 years." It is scandalous because the intent behind it is to convince others that such relationships are not sinful, which not only confirms the ones doing it in their sin but also contributes to the decay of the Christian community's moral sense in these matters--leading to a deadening of conscience and the likelihood that others, too, will fall into similar sins. That is the scandal.

This situation is decidedly different for those who have sinned in other ways that do not pertain to the expression of the kiss. So it is apples and oranges and incorrect to suggest that we are unfairly discriminating between those in immoral sexual relationships and those who, for instance, have stolen from the poor. Both are sinful, but in the one case, the kiss is a public expression of the sin, while in the other it is entirely unrelated.

Now, what we do with that feeling is important, too. We don't tackle them and pull them apart. We don't "tsk tsk" at them audibly or wait until they look in our direction and glare. We don't withhold the Peace from them. We don't otherwise make a scene. At a very minimum, we ought to say a prayer for them. Each situation is different, but I'd say it'd be potentially appropriate to counsel the couple privately about it, if you have an existing relationship with them that allows for that to happen in a way that they might actually listen. To be clear, I am not advocating for public shaming or anything like that; I am only saying that our reaction, as a community, should not be that "there's nothing wrong with it," which seems to be what Fr. Martin is hoping for.

Fr. Martin also hems and haws about not being a theologian and how that some other teachings--he names Humanae Vitae--have not been accepted, much like the purported majority of Catholics approve of gay marriage. He suggests--if I understood right--that for a teaching to be authentic Christian teaching, it must be accepted by the Christian faithful. I can only assume he is alluding to the sensus fidelium.

I have to be honest and say that this, more than anything I've seen from him, gives me pause, because it seems to suggest that he does actually believe that these teachings are wrong and that we should (and eventually will) change them. Up to now, my take has been that he's just overly focused on being tactful and welcoming, but this makes me question if that's the case...

I also am not any kind of official theologian, but my understanding is that this inverts the function of the sensus fidelium. It is primarily meant to be an expression, to quote the famous phrase by Vincent of Lerins, "that which has been believed everywhere always by all" [of the faithful]. So if we are to apply this here, it would be clear that the traditional belief of the Catholic faithful is that such things are immoral, not the other way around. Further, the idea that the laity can be right in opposition to the hierarchy is officially excluded as a valid interpretation.

The Catholic Church's teachings that are most notably at odds with current Western/American culture tend to be those having to do with sexuality and related issues (such as abortion). The fact that they are resisted and not accepted by all of us has no bearing on their veracity or standing as part of true Catholic doctrine. It is, rather, more of a reflection on our current cultural separation from our Christian roots.

It is not at all surprising that, especially, cradle Catholics--who have typically not been well-catechized and who are inescapably immersed in a culture that is on some points at odds with Catholic doctrine--should not be accepting of those points of doctrine, especially when there are equally influential aspects of our culture, such as self-determination/actualization, unfettered "freedom," democratic governance, and relativism, that incline us to believe that we, as individual persons, are the ultimate arbiter of truth as it applies to us. All of this is a kind of perfect storm to create a condition where large swaths of baptized Catholics reject teachings, often based on cultural and political affiliations, but also based on a lack of personal fortitude--some teaching are just hard. I should know!

So contrary to what Fr. Martin seems to be suggesting here, the laity do not--in contradiction to the hierarchy--determine what is true Catholic doctrine. On these points--artificial contraception and other various forms of sexual behavior--our collective inability to accept them is no indicator that they are wrong or false or subject to revision. It is simply that we are flawed human beings who face an immense challenge to overcome both our carnal passions as well as our cultural predispositions.

Believe me, I am sympathetic. Catholicism, indeed pretty much any form of traditional Christianity, is not an easy way of life. It requires sacrifice. It requires a life-long endeavor (and even after this life if need be) to conform ourselves to God. The way of the Cross is hard, but the grace of God is there to help us if only we will avail ourselves of it. And with it comes immeasurable peace and joy in this life and the next.
Posted by Ambrose Little at 1:45 AM