The Riches and Poverty of the Church 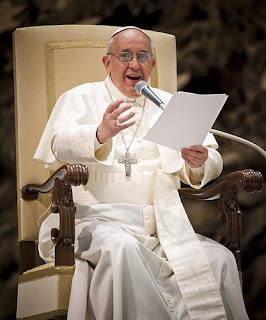 Much has already been made of our new pope's obvious humility and closeness to the poor and needy. Everyone who knows him seems to confirm it; he already has a history of living it (e.g., eschewing the episcopal palace and living in a normal apartment, preparing his own meals, using public transportation, telling his people to stay in Argentina rather than coming to his incardination and now installation as pope, to give the money they would spend on the trip to the poor, visiting the poor and sick, washing their feet,  and so on), and he is making an effort to continue living it now that he is pope.

Today he spoke on his choice of Francis, confirming that it is indeed after St. Francis of Assisi:

"Francis of Assisi...the man of poverty, the man of peace, the man who loves and guards creation... How I would like a church that is poor and for the poor." 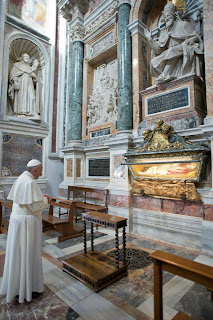 One of the first things he did, the morning after being elected, was to visit the tomb of Pope St. Pius V, a Dominican pope, a reformer, and, interestingly enough, the pope who started the tradition of wearing a simple white cassock--which is the habit of the Dominicans.

St. Francis was also a reformer. Although he only became a deacon, he began a reform movement that spread like fire and continues to this day--an evangelical witness of poverty.

In those days, many people were losing faith because, in part, of the wealthy way in which many of the clergy, especially the high ranking clergy, lived. St. Dominic recognized this also, and this is in part why he enjoined the vow of poverty on his friars as well. It is a kind of evangelical asceticism, a closeness to the poor for the sake of the poor's evangelization.

Many, worldly minded people will appreciate Pope Francis' emphasis on the poor. Certainly Christ himself taught what is now called the preferential option for the poor (#57). And this is precisely what our Holy Father is living, showing, and teaching himself. The catch is, again, that this is all ultimately for an evangelical purpose. It is a way of leading people to Christ; it is not a simple humanitarian impulse.

Lest anyone think I am adding my own interpretation on this:

We can walk as much as we want, we can build many things, but if we do not profess Jesus Christ, things go wrong. We may become a charitable NGO, but not the Church, the Bride of the Lord. ... When we do not profess Jesus Christ, we profess the worldliness of the devil, a demonic worldliness. ... When we journey without the Cross, when we build without the Cross, when we profess Christ without the Cross, we are not disciples of the Lord, we are worldly: we may be bishops, priests, cardinals, popes, but not disciples of the Lord. ... My prayer for all of us is that the Holy Spirit, through the intercession of the Blessed Virgin Mary, our Mother, will grant us this grace: to walk, to build, to profess Jesus Christ crucified.

These are the Holy Father's own words, in his first papal homily. And they strongly echo the words of St. Paul in his first letter to the church in Corinth:


The message of the cross is foolishness to those who are perishing, but to us who are being saved it is the power of God. ... For Jews demand signs and Greeks look for wisdom, but we proclaim Christ crucified, a stumbling block to Jews and foolishness to Gentiles, but to those who are called, Jews and Greeks alike, Christ the power of God and the wisdom of God. For the foolishness of God is wiser than human wisdom, and the weakness of God is stronger than human strength. ... When I came to you, brothers, proclaiming the mystery of God, I did not come with sublimity of words or of wisdom. For I resolved to know nothing while I was with you except Jesus Christ, and him crucified.

Caring for the poor and needy is today, perhaps more than in any other age in human history, generally recognized to be a good, desirable thing. It is certainly common ground we can find with those who are on many other counts opposed to the Church. And that should give us some pause.

While caring for the poor and needy is a good, it is not an end. As Catholics, as Christians, we know that our end is God. We were made by him and for him. When Christ exhorts us to care for the poor, it is with an eschatological purpose. It is because each person bears the image of God that each person has such great dignity, rich or poor alike. Thus we truly are serving Christ by loving our neighbor. Christ was not just giving us a nice, religious way of saying that we should help the poor. No, he was explaining that it is a metaphysical reality that we are serving him by serving "the least of these"; it is truly, really a way of loving both God and our neighbor by the same action. It is a direct, not an indirect, way to love God, who is our end.

And it is because of this that when we separate our acts of charity from their theological end, treating them as ends in their own right, that "things go wrong" as the Holy Father put it. If we are not, by our care for the poor, professing Christ and him crucified, we are completely missing the point. We are lopsided and wrongheaded. We get confused and potentially lost; "we profess the worldliness of the devil, a demonic worldliness" because seeking an end other than God, no matter how noble in appearance, leads us away from God, turns us in on ourselves, and that is the very way of the devil, who seeks nothing more than to draw us away from God.

Authentic care for the poor demands a lively faith. It is this faith that keeps us well rounded in our care, because poverty is not limited to lack of material things. We can be physically poor--suffering some lack of physical wholeness or wellness. We can be socially poor--lacking friends and companionship. We can be poor in justice--having suffered wrong at the hands of others. We can be poor in freedom--captive, in prison (physically, psychologically, spiritually). We can be morally poor--messing up our lives, the lives of others, and our relationship with God. And most seriously, we can be spiritually poor--living a sterile life devoid of transcendence and relationship with God.

And this is where I begin to get to the point. :) Some criticize the Church for all of our supposed lavish luxury. They see the grand architecture and amazing artwork, the fine ornamentation and the expensive vestments, and they claim that these riches are contrary to the Gospel and that they show a disdain for the poor. "If the Church really cared about the poor, it would sell all that crap and give it to the poor."

Ignoring the fact that Catholic charities far and away outstrip all global charities, both today and, even more so, throughout our long history, sentiments like these are an example of how "things go wrong." Because these things are themselves a ministry to the poor--especially the spiritually poor. The sole purpose of the Church is to draw us to God, and She uses every means at her disposal to do so--both the splendid riches of our most beautiful cathedrals and elaborate liturgies and the evangelical poverty of St. Francis, St. Dominic, and all those who profess such vows. She uses her intellectual riches to draw people through the mind, and She uses the corporal service to draw others through acts of simple kindness. She uses her supernatural riches of the prayers and merits of cloistered religious and hermits, the graces of the sacraments in every parish throughout the world, and the evangelical vigor of the apostolic orders and, yes, the laity as well. All that the Church is and does is ordered towards bringing people to Christ.

This of course does not mean that every action of every Catholic is so ordered; however, that is how it should be, and that is how the Church as both a supernatural and natural institution is ordered.

Pope Benedict XVI is known for his restoration of our liturgical riches. He taught us by his example that these are good means to enrich the spiritual poverty that has even become spread throughout the members of the Church. But he has also taught that "love for widows and orphans, prisoners, and the sick and needy of every kind, is as essential to her as the ministry of the sacraments and preaching of the Gospel." He on several occasions exhorted people to not waste vacations idly, but to spend them renewing our relationships with God and others, and he showed this in the way he spent his own. He untiringly gave us the riches of his intellectual efforts through books, apostolic letters, homilies, and audiences.

Pope Francis may have a different emphasis, one that focuses more on simplicity in practice and an evangelical poverty, according to his vows. That doesn't mean he is changing the Church, that he'll suddenly start divesting the Church of all material wealth, and it certainly does not mean he will lack a focus on orthodoxy (much less "change the Church's teaching" as if this were something a pope can do!).

Benedict did not eschew tending to the needs of the poor; his emphasis was on a different kind of poverty, one that the world does not so well perceive. It seems that Francis will emphasize other kinds. We should be reluctant, however, to take comfort that his emphasis is better received by the world lest we be lulled into a spiritual laxity. Perhaps that is why our Holy Father came out so strongly in his first homily emphasizing what he did. The world is not the judge of the Church, what is good for people, nor what is good for a pope to be like or focus on; only God is that judge.

Together our Holy Fathers illustrate the holistic way in which the Church cares for the poor, always keeping in mind, word, and deed "Jesus Christ, and him crucified" but exemplifying it in different ways with different emphases according to their particular talents and callings.
Posted by Ambrose Little at 3:47 PM