Does Conservatism Have to Be Synonymous With Ignorance? 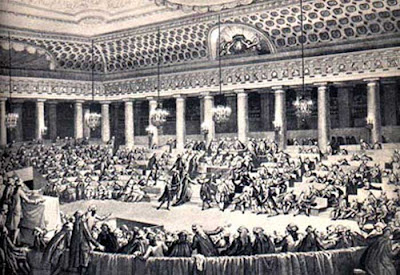 I thought I'd steal my title from this opinion over on HuffPo because I've sort of been thinking the same thing lately, after hearing Rick Santorum tell Puerto Rico that they have to make English their primary language if they want statehood (they already recognize English as primary), and then as if on a roll, I heard about him exaggerating and bending what seems to be the facts in regards to euthanasia in the Netherlands (there's plenty to criticize there without exaggerating). I know politicians say things off the cuff all the time, but I just cringe when it happens to conservatives because they have certainly been cast in that light. It seems like they would want to be extra careful to not feed that fire.

To answer the question, obviously, no, conservatism doesn't have to be synonymous with ignorance, and for the non-politically entrenched, it's clear that it isn't. You see plenty of ignorance from liberals as well (just watch the O'Reilly Factor for a while; does a pretty good job of calling them on it).  It happens because people are too quick to judge, too quick to assume things based on their own prejudices, and then form ignorant opinions based on these.

That said, the HuffPo article is a good example of how people who are politically entrenched read into what their opponents say what they ignorantly want to believe about them. Lawrence Krauss, the author, claims that "Santorum has argued that evolution, the basis of modern biology, has no firm basis in fact." He links to an article, but having read the article, it's clear Rick has said no such thing. Rick said:

This was in relation to his amendment on the subject that passed the Senate 91-8. No doubt not all of those 91 were conservatives, right? Rick seems to have a pretty well-thought-out view on the subject; he certainly doesn't say evolution has no basis in fact, as claimed by Krauss.

Krauss takes a similar tack on Santorum's views on climate change, painting him as a right wing loon. But Santorum again, even in the references Krauss himself offers, is much more nuanced than he is presented. To suggest that the earth has not warmed and cooled over time prior to the last century is patently false. It has (ice ages, anyone?). Global climate is a staggeringly complex system to grapple with, and at best, science can offer us in this area thoughtful guesses, guesses that are questioned by many, including quite a few scientists. Santorum is in pretty qualified company in being reluctant to throw his hat into the ring on the side of climate change activists.

Krauss goes on to, quelle surprise, lambast Rick's views on contraception and sexuality in general. Here is where Krauss demonstrates his own ignorance and confusion, unable to see the difference between contraception/abortion and medicine intended to heal disease. However ineffectively articulated Santorum's views related to sex might be, he actually is pretty much in line with the solid, well-informed, and well-reasoned Catholic position, especially as elaborated by recent Popes Paul VI and Blessed John Paul II.

The biggest problem I've seen in defending the Catholic positions on marriage, sex, and family, is that when you isolate one concern without regard to the other, it obscures the overall unity and coherence of Catholic thought on the matter. So it's no surprise that you can snag tidbits here and there from quick interviews and, also because they are so different from mainstream thinking, make it appear extreme or not-well-reasoned.

Related to this, Krauss is actually again ignorant, in that he suggests that Santorum's views on these issues are not orthodox Catholic views, feigning generosity: "It would be tempting to chalk up Mr. Santorum's medieval views to a devout Catholic fundamentalism, but that is unfair to Catholicism." Not only is he wrong about these not being devout Catholic views, but he is also wrong in identifying the era in which these views have been most fully developed, namely in the latter half of the 20th century (and fully considering all that modern science has to offer).

Which takes us back up to the top, where Krauss started off showing his extreme ignorance:


The Catholic Church has long been an enemy of emerging technology, especially when it comes to reproductive health, opposing any technology that alters the 'natural' scheme of sex and reproduction. Quixotically, the focus on sex is unique and is, needless to say, inconsistent with the running of hospitals, which by their very nature do daily battle against otherwise naturally occurring disease and death.

The latter half is the aforementioned simpleminded, ignorant view that lumps all sexual/reproductive services in with the rest of medicine. It's not hard to understand the difference--if you don't classify reproductive capacity (and its result--children) as a human defect or disease (i.e., something to be fixed/treated medically), then you don't consider such things the same way you consider true maladies.

As for the ridiculous initial statement, to be fair to Krauss, he is just ignorantly buying into the popular but patently false mythology that the Church is an enemy of emerging technology, part of the larger false mythology that the Church is opposed to science. I'm surprised we didn't see a Galileo allusion just to top it off. It really is galling ignorance, because you don't have to try hard to get a more realistic picture of, well, reality.

You'd think someone opining about the ignorance of conservatives and, specifically Santorum, would maybe have done a bit more due diligence himself to rid himself of ignorance, but unfortunately, prejudice can be quite the opaque blinder to reality.

This is not to say that there isn't ignorance in conservatism; in fact, some of the leading talking heads like Rush Limbaugh and Glenn Beck (not to mention Pat Robertson) tend to make me shake my head. I also think that conservatism is a kind of de facto human position; we seem to be inclined to stick with the status quo unless we're motivated otherwise. Sticking with the status quo doesn't require much thought or investigation, so it follows that ignorance could be more closely associated with conservatism than liberalism, which seeks to change things for what they see as better.

On the other hand, there is something to be said for higher education tending one towards liberalism (in the general/classic sense), because a core skill that is taught in higher ed is critical thinking, which can make one question the status quo and come to alternative solutions. The problem is that too many educated people end up forgetting those skills and instead just assume that prevailing liberal ideology is de facto more reasoned and less ignorant, which leaves them in the same ignorance and arrogance that they deplore in conservatives, blindly following the opinions of their peers. That's what we see in the media today (because most journalists have at least some higher ed), and Krauss is a stereotypical example of that.

The bottom line is that open-minded and critical thinking is hard. It requires real effort, and most people just have other things they'd rather do with their time (and would prefer to avoid the discomfort of questioning their prejudices). You might be a highly educated liberal; you might be a conservative with a high school diploma--if you're just following the opinions of your peers, chances are you're gonna tend toward ignorance and prejudice.  You can be a highly educated and informed conservative (e.g., at least 5 out of 9 of our Supreme Court justices or stop by First Things); you can be an uneducated and ignorant liberal (watch Watters' World for a healthy dose of that), and all manner of things in between.

When I've seen Rick Santorum taking time and articulating his views, even in the face of the ignorance and hostility that he often faces, he does a decent job usually. But because his views can be contrary to the popular ones, it takes time, listening, and, yes, open-minded thought to give them a fair shake. The average liberal journalist isn't, from what I've seen, interested in doing that. True, sometimes he doesn't articulate things well and sometimes says off the cuff ignorant things, but it would be, well, ignorant to paint him as an ignorant simpleton the way Krauss does (and he's far from alone among journalists in doing that--more evidence of just ignorantly following the crowd).

P.S. For the record, I don't agree with Rick on all his positions (e.g., capital punishment), and on some of them I'm just still undecided/ambivalent (e.g., healthcare/economy), but I understand that his positions, especially on the most controversial issues, are at least as well reasoned as the contrary positions. What can I say, I guess I'm a stereotypical independent, but one benefit of being independent is that it makes it hard to just ignorantly go with the crowd. :)
Posted by Ambrose Little at 10:39 PM