Slaves of the Zeitgeist 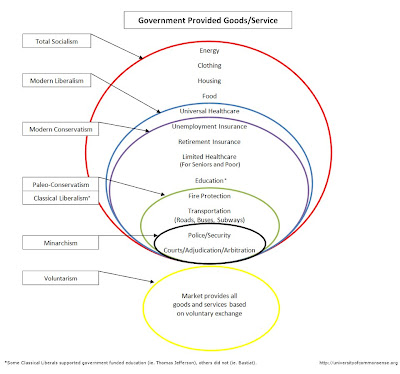 A friend of mine posted this diagram that tries to map named political groupings with their respective views on what goods/services that government should provide.

What I find fascinating is that what would be considered very conservative today was considered to be liberal ("classical liberalism") back in the early days of the US. This comes at an interesting time for me because I've been listening to a book called Sarum, which is a long historical fiction that traces a history of Sarum in England from hunter-gatherer up to very recent. One of the threads you see, especially starting in the High Middle Ages, is the recurring theme of the rights of the common man.

The author does a pretty good job of showing the conflicts throughout the succeeding periods between the conservative and liberal viewpoints, and I don't know if it's intentional or not, but it also illustrates that what is liberal in one age becomes assumed/commonplace/even conservative in another. In each age you see people who are dyed in the wool conservatives and those who are seen as liberals/radicals.

It's curious to me because I think it's worth asking ourselves if we shouldn't keep this in mind when forming our own views on things. The dialog in the US is often framed as conservatives want to go back to the way things were/as intended by the founding fathers. It's a sort of primitivism, often underpinned by a quite romanticized view of the way things were.

Even within my parents' own generation, there is sometimes a sense that the 50s were some kind of golden age in America, but as Frau Dr. Ross (my German professor in college) pointed out once--things were not so peachy keen back then if you were, say, black or a woman. The recent movie "The Help" really drives this home--I strongly recommend it for that reason.

Similarly, we often romanticize the times of the founding fathers, but things were not peachy keen then, either. It's not an unfair criticism to point out that many of them, including Jefferson, were slave holders. No doubt most contemporary women would be scandalized by their views on women. I'm not suggesting we anachronistically judge them as morally inferior; in fact, quite the opposite--the reason people have different views on these things today is often not due to individual moral consideration/superiority but rather that we are inescapably products of our ages. These guys were the radicals, the liberals of their age and made their ideals into reality in large part--very admirable.

What I am thinking, though, is that we probably should avoid a romantic primitivism when forming our ideas on what society and government should look like today. We're in quite a different context. A lot has changed. No doubt some of this is for the better and some for the worse. Development of social ideas as related to government is called for as society changes, and so I think it's rather naive to hold to a classical liberal view (now "paleo-conservative" according to the diagram above). Or to even go further back to something akin to feudalism (voluntarism/libertarianism). Things change for a reason, often for good reasons.

Another interesting consideration I picked up from Sarum is that in Queen Elizabeth I's reign, almost 500 years ago, even then they saw that relying purely on private and church charity was insufficient to help the poor. This was in a time when people in society, as a rule, grew up with a strong Christian ethic (unlike today in the US) and when the church was actually supported/intertwined with the state. In other words, before her time they had what many conservatives today advocate for--getting the government out of helping the poor--but it just wasn't working then, so why should it work now? I mention this because while in theory I am inclined towards taking care of the poor without relying on the government, I've often wondered if it would be feasible, especially today in our me-me-me society that lacks the strong pro-poor Christian ethic. And this historical anecdote is evidence that it probably wouldn't.

It seems to me that we, especially Christians--especially Catholic Christians--need to rethink how we frame our views about government. I would suggest again (as have others) that it is inappropriate as a faithful Christian to align with the Democrat or Republican parties. We need to keep in mind that a Christian worldview cannot be contained within any political party--because the Christian worldview by its very nature transcends temporal concerns, but even more so because with our basic two choices (ignoring fringe parties), each party has positions that diverge widely from the honest Christian view.

Furthermore, we should keep in mind that the designations of conservative and liberal are not good or bad in themselves, and that they are not only time dependent, in terms of whether or not they align with Christian views, but they are also issue-dependent, which has to be contextualized by time and culture. We should not go along as mindless drones, slaves to our zeitgeist, so that we become blind to the good in those we see as Them and oblivious to the evil in those we see as Us.

Our discernment of what is the right on any given issue must not be whether it is held by the group labeled with Conservative or Liberal, Right or Left, Republican or Democrat--we must resist the politicians and pundits' simplistic categories (in politics or even within Catholicism). Our discernment must be based on whatever is true, whatever is honorable, whatever is just, whatever is pure, whatever is charitable, whatever is full of grace. We should ally with those in whatever group or party that aligns with that discernment, without being subsumed into or becoming subservient to those groups.

Above all, let us not forget our calling to conform our own lives to Christ, that we are but sojourners here, pilgrims and citizens of heaven, and so to act in joy, peace, patience, kindness, generosity, gentleness, and above all charity towards our fellow wayfarers.


In the world you will have trouble, but take courage, I have conquered the world. (Jn 16:33)

Posted by Ambrose Little at 3:45 PM