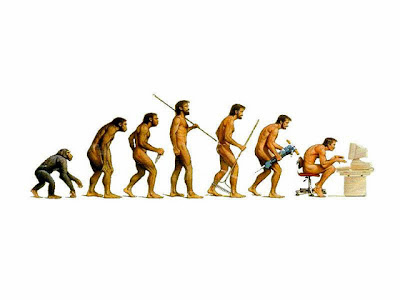 Every time I see someone explaining why something is the way it is based on "evolution," I smile inwardly. It's amusing to me because it is so similar to the accusation against theists that every time we need to explain something for which we don't have evidential explanation, we supposedly say "Goddidit."  (They smash the words together to make it sound and look silly and worthy of scorn by the intellectual elite they know themselves to be.)

Now, before evolutionists go all apeshit batty on me, let me say that as far as evolution is concerned, my current position is that I am inclined to grant that it is possible, perhaps even probable. My problem is that I simply do not know enough about the requisite sciences to make a truly informed decision, so I am forced to rely on authorities and argumentation that I can understand. (I think I'm in good company in this situation, too; even some of the most belligerent and devout atheists doubtless fall into this category.)

So far, I haven't really felt a need to really dig deep into the sciences related to the theory. I have read this or that book, talked to this or that person, on both sides of the issue. Both sides have their array of purported evidence (which I personally cannot verify) and both have arguments, objections to arguments, and answers to objections (and so on ad nauseum). Both sides seem utterly convinced that they are right and that others (often) are at best ignorant and at worse deviously conniving in the service of their ideologies. Given that I was raised in a "young earth" environment, that I am willing to give evolution the benefit of the doubt is some evidence of my open mindedness.

It's this consideration of questionable motives that makes me hesitant to trust either side, because both sides seem convinced that if they can just prove the other wrong in this scientific question then the other's belief system will come crashing down around their ears and, simultaneously, make their own belief system the only viable alternative. Because so much ideology is entrenched, it is difficult at best to tease out the truth. Both sides have relatively cogent argumentation, so the only way to certainly resolve it would be to be more than we are, to be able to directly and personally observe the evolution of the species over time, or at least to be able to reliably reproduce evolution on the scale that it is supposed to have happened in a controlled scientific experiment. Otherwise we're left with extrapolation, not verifiable experimental evidence or personal observation/experience.

Given that we can't do these things, the best I can offer evolution in terms of assent is that it is possible, perhaps even probable, but I remain skeptical. And when I read argumentation to the contrary (for instance this), the doubts are renewed. My position is not driven by a fear that my belief system is at stake; I've written about this elsewhere. I don't feel threatened by the theory at all (actually, I find it intriguing--it opens up some interesting theological speculation as well). Disproving evolution alone does not necessitate a young earth/literal creationist position; it doesn't even necessitate belief in God. But it certainly does provide the foundation for much contemporary atheism, so it's no wonder that atheists feel threatened by challenges to it and respond to such challenges with much vitriol.

So it is from this position of tentative assent that I guess I am more skeptical than others when someone attributes some cause to evolution. I've seen it often enough, in this or that program on TV (that have little to do with science or evolution as a subject), in explanations of spirituality, even in explanations in favor of this or that diet (interestingly, different dietary theories use evolution-based theories to justify their claims).

My latest encounter was this morning, as I was beginning to read Believing Bullshit: How Not to Get Sucked into an Intellectual Black Hole, I (perhaps predictably) ran into this statement right in the beginning of the book: "We evolved in an environment containing many agents— family members, friends, rivals, predators, prey, and so on. Spotting and understanding other agents helps us survive and reproduce."[1] Ah, the old H.A.D.D. hypothesis...


Things like this are often presumed based on relatively paltry evidence. We look at this or that bone fragment, this or that physiological similarity, this or that genetic similarity, and we deduce grand narratives on the origins of species. And such a general theory may indeed be true (I do not treat it as a conviction, personally). But then like a jazz player, people start riffing off this general theory, embellishing the narrative here and there to tell a story about why this or that thing is the way it is. In reality, scientifically and objectively speaking, we have little to no ground to stand on for such embellishments. We cannot employ the scientific method for these cases, often because the environment we are investigating is lost deep in the past.

But by enlisting the general theory of evolution (which again itself stands on relatively paltry scientific grounds--compared to other scientific endeavors like technology, experimental physics, medicine), people feel entitled to derive all sorts of interesting stories.  In reality, these stories are more akin to ancient mythologies than science. They employ just enough of what contemporaries believe to be true about the world and apply that to the past to build a narrative believable to contemporary ears.  The difference for our contemporaries is that where in the past people would have attributed causes to a God or gods, today they attribute the cause to evolution. Evolutiondidit. And thus, my aforementioned smirk. Even a very well educated and thoughtful guy like Law falls into the enticing trap of constructing (or at least giving credence to) such evolutionary myths.

Another interesting analogical observation is that the relative credence one seems to be willing to give such myths is directly proportional to one's conviction in the supporting broader narrative. Evolutionists want to believe that evolution (or some other natural cause) is the explanation. Theists want to believe that God (or some god/supernatural cause) is the explanation. The mental processes and proclivities are the same--we are all human and subject to our prejudices.


One last observation about evolution in general. It seems to me that a lot of ink, time, energy, and money has been spilled over this issue, and I'm not sure I understand, from a scientific point of view, why it is so important. Evolution's primary focus is the past, offering a rationale for why the biological world is the way it is. As a theory, it doesn't seem to offer much in the way of practical applicability, certainly nowhere near as much practical potential as other sciences, and in terms of insights that might lead to practical advances, they seem limited at best (such as the occasional hypothesis that can be tested and results in some practical application). In my eyes, this is further evidence that evolution is less about science that "works" and more about ideologies. On that ground alone perhaps one could question whether or not it should be taught as core curriculum in science.